From the Loyola Kids Book of Heroes by Amy Welborn: 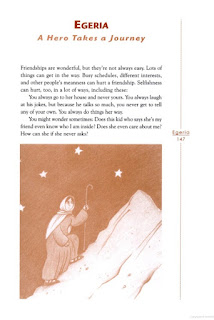 Very different from the above is the account of her pilgrimage written by a nun for the sisters of her community towards the end of the same century (c. 385). Gamurrini, who discovered it in the library of Arezzo in 1884, attributed it to Saint (?) Silvia of Aquitaine, the sister of Rufinus, prefect of the prætorium under Theodosius the Great and his successor Arcadius, whence it became known as the "Peregrinatio Sanctæ Silviæ". Dom M. Férotin, however, later showed (Rev. des Questions Historiques, Oct., 1903) that the real authoress is a native of Galicia, Spain, whose name is variously given as Etheria, Echeria, and Egeria. She seems to have been a lady of importance with friends at court, possibly a relative of Theodosius himself (who was a Galician). Wherever she went, the clergy, even bishops, attended her and acted as her guides, while imperial officers gave her a military escort where the road was unsafe. During her pilgrimage of over three years, she visited Western and Eastern Palestine, Idumea, Sinai, Egypt, Asia Minor, Syria, and Mesopotamia. She is a keen observer, and writes with a certain charm in spite of her crude, provincial Latin.
Posted by Amy Welborn at 11:00 PM