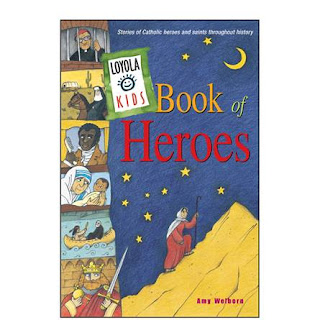 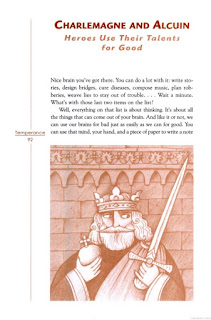 Use the Loyola Kids Book of Heroes by Amy Welborn in your homeschool history curriculum.
About Charlemagne, from the old Catholic Encylopedia:
While enough has been said above to show how ready he was to interfere in the Church's domain, it does not appear that this propensity arose from motives discreditable to his religious character. It would be absurd to pretend that Charlemagne was a consistent lifelong hypocrite; if he was not, then his keen practical interest in all that pertained to the services of the Church, his participation even in the chanting of the choir (though, as his biographer says, "in a subdued voice") his fastidious attention to questions of rites and ceremonies (Monachus Sangallensis), go to show, like many other traits related of him, that his strong rough nature was really impregnated with zeal, however mistaken at times, for the earthly glory of God. He sought to elevate and perfect the clergy, both monastic and secular, the latter through the enforcement of the Vita Canonica or common life. Tithes were strictly enforced for the support of the clergy and the dignity of public worship. Ecclesiastical immunities were recognized and protected, the bishops held to frequent visitation of their dioceses, a regular religious instruction of the people provided for, and in the vernacular tongue. Through Alcuin he caused corrected copies of the Scripture to be placed in the churches, and earned great credit for his improvement of the much depraved text of the Latin Vulgate. Education, for aspirants to the priesthood at least, was furthered by the royal order of 787 to all bishops and abbots to keep open in their cathedrals and monasteries schools for the study of the seven liberal arts and the interpretation of Scriptures. He did much also to improve ecclesiastical music, and founded schools of church-song at Metz, Soissons, and St. Gall. For the contemporary development of Christian civilization through Alcuin, Einhard, and other scholars, Italian and Irish, and for the king's personal attainments in literature, see CAROLINGIAN SCHOOLS; ALCUIN; EINHARD. He spoke Latin well, and loved to listen to the reading of St. Augustine, especially "The City of God". He understood Greek, but was especially devoted to his Frankish (Old-German) mother tongue; its terms for the months and the various winds are owing to him. He attempted also to produce a German grammar, and Einhard tells us that he caused the ancient folksongs and hero-tales (barbara atque antiquissima carmina) to be collected; unfortunately this collection ceased to be appreciated and was lost at a later date.
From boyhood Charles had evinced strong domestic affections. Judged, perhaps, by the more perfectly developed Christian standards of a later day, his matrimonial relations were far from blameless; but it would be unfair to criticize by any such ethical rules the obscurely transmitted accounts of his domestic life which have come down to us. What is certain (and more pleasant to contemplate) is the picture, which his contemporaries have left us, of the delight he found in being with his children, joining in their sports, particularly in his own favourite recreation of swimming, and finding his relaxation in the society of his sons and daughters; the latter he refused to give in marriage, unfortunately for their moral character. He died in his seventy-second year, after forty-seven years of reign, and was buried in the octagonal Byzantine-Romanesque church at Aachen, built by him and decorated with marble columns from Rome and Ravenna. In the year 1000 Otto III opened the imperial tomb and found (it is said) the great emperor as he had been buried, sitting on a marble throne, robed and crowned as in life, the book of the Gospels open on his knees. In some parts of the empire popular affection placed him among the saints. For political purposes and to please Frederick Barbarossa he was canonized (1165) by the antipope Paschal III, but this act was never ratified by insertion of his feast in the Roman Breviary or by the Universal Church; his cultus, however, was permitted at Aachen [Acta SS., 28 Jan., 3d ed., II, 490-93, 303-7, 769; his office is in Canisius, "Antiq. Lect.", III (2)]. According to his friend and biographer, Einhard, Charles was of imposing stature, to which his bright eyes and long, flowing hair added more dignity. His neck was rather short, and his belly prominent, but the symmetry of his other members concealed these defects. His clear voice was not so sonorous as his gigantic frame would suggest. Except on his visits to Rome he wore the national dress of his Frankish people, linen shirt and drawers, a tunic held by a silken cord, and leggings; his thighs were wound round with thongs of leather; his feet were covered with laced shoes. He had good health to his sixty-eighth year, when fevers set in, and he began to limp with one foot. He was his own physician, we are told, and much disliked his medical advisers who wished him to eat boiled meat instead of roast. No contemporary portrait of him has been preserved. A statuette in the Musée Carnavalet at Paris is said to be very ancient.
Posted by Amy Welborn at 10:30 PM