From the Loyola Kids Book of Heroes: 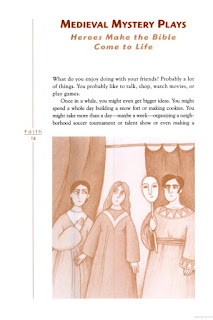 Mystery plays and miracle plays (they are distinguished as two different forms although the terms are often used interchangeably[1]) are among the earliest formally developed plays in medieval Europe. Medieval mystery plays focused on the representation of Bible stories in churches as tableaux with accompanying antiphonal song. They told of subjects such as the Creation, Adam and Eve, the murder of Abel, and the Last Judgment.[2] Often they were performed together in cycles which could last for days.[3] The name derives from mystery used in its sense of miracle,[4] but an occasionally quoted derivation is from ministerium, meaning craft, and so the 'mysteries' or plays performed by the craft guilds.[5]