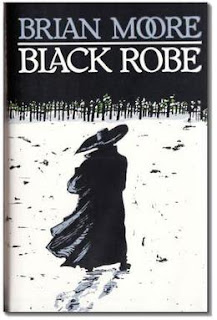 We like to think of religious faith as a comfort, an unyielding rock in times of trouble and an island of certainty in a constantly-shifting world.

But what happens to us when life, as it has a habit of doing, challenges that hard-won and deeply held faith? What is our response when the ground of our belief is shattered?

Black Robe is the story of Father Jean Laforge, an idealistic French Jesuit eager to evangelize the Native Americans of seventeenth-century Canada. Moore often rooted his fiction in historical events, and in Black Robe, he made use of the detailed histories of mission activity the Jesuits themselves left in their volumes of Relations, available online here and in an edited volume here. Many histories have been written utilizing these fascinating primary sources, and modern readers interesting in exploring the sacrifices and suffering of the French missionaries to our continent might turn first to the nineteenth-century American historian Francis Parkman, whose The Jesuits in North America remains in print today.

Despite his youth and inexperience, Father LaForge insists to his superiors that he is ready to travel from the relative safety of the coastal settlements of New France to minister in the dangerous interior. His enthusiasm is fueled by nothing less than his unswavering conviction that the unbaptized are destined for the eternal fires of hell. When faced with that horror, who would not risk one’s life and comfort so that others might be spared something much worse?

But LaForge’s assumptions are quickly challenged. The Algonquins who are paid to be his guides have no interest in his faith and find his European delicacy and celibate priesthood nothing but an occasion of mockery. The Algonquin are also deeply suspicious of LaForge and are convinced his insistence on performing the ‘water sorcery” (baptism) on them will do nothing but anger the spirits. They decide to abandon him when they see him secretly baptizing a dead child. Soon after, however, they are chastened by their memories of a promise to Champlain to protect the Black Robe, so they return for him, only to be attacked and captured as prisoners by a band of ruthless Iriquois.

For the rest of the novel, LaForge’s faith is sorely tested, not only by cultural and spiritual differences, but by the knowledge that his protectors are suffering at the hands of the Iroquois soley because of his presence among them. The deepest test, however, faces him at the end of the novel, when those he has come to serve finally turn to him and ask to be baptized, but, ironically, for all the wrong reasons.

At last, LaForge can baptize, but the problem is clear : should he do so, when he knows the motives for the request are wrong-headed and the baptism will not accomplish what they expect? At that moment, Father LaForge’s ideals he began with are shattered, and all he has given his life to comes down to how he will answer one question, posed by a Huron chief. “Do you love us, Black Robe?”

So the question is asked of us when our own ideals are challenged. Do we abandon them completely or do we, as Father LaForge seems moved to do at the end of Black Robe open ourselves to the possibility that our ideals may have brought us to one place, but in order to move on and really live by the essence of what those ideals were really all about, we must be willing to be changed by the unexpected ways of God’s movement through the world just as strongly as we desired to change that same world?

The question of crumbling ideals is one that is central to the fiction of Brian Moore, the author of Black Robe. It emerges frequently in his early novels, as characters are confronted by personal pain that prompts them to doubt. In his first novel, The Lonely Passion of Judith Hearne, the title character, frustrated and loveless, professes her doubt in front of a Tabernacle. Later in his career, Moore tended to focus on the challenges turbulent and unjust societies offered to an individual’s ideals in books like The Colour of Blood and Lies of Silence.

Brian Moore wrote relatively short, tightly focussed novels with settings that were as varied as the places around the globe his own life took him. Born as one of nine children in Ireland in 1922 into a Catholic family, Moore left home at the age of twenty to serve in the British Army during World War II. He saw action in Italy and France, then served with the United Nations for two years after the war in Poland, where in the aftermath of Auschwitz and the Soviet presence in Eastern Europe he witnessed the deadening and deadly evil of totalitarianism, no matter what the ideology that produced it.

In 1948, he moved to Canada to pursue a career in journalism (he eventually became a Canadian citizen), leaving that in 1953 to attempt to make a living writing novels full-time. Moore lived in New York in the late 1950’s and early 60’s on a Guggenheim Fellowship, then moved to Malibu, California in 1966 to write the script for Alfred Hitchcock’s film Torn Curtain. Moore remained in California for the rest of his life. He died in 1999, after a full career of publishing 20 novels.

Although we might be tempted to call Moore a “Catholic novelist” for his frequent use of Catholic themes and figures in his novels, he most definitely was not, at least in terms of his personal identity. Moore consciously abandoned his childhood faith, as he tells it, the moment he left Ireland to serve in the war. However, he continued to use Catholicism and religious belief in general as a way to explore his favorite theme: faith and disillusionment. The most explicit use of faith besides Black Robe was in Catholics, the story of a renegade monastery holding to pre-Vatican II practices on an island off the coast of Ireland. Readers with a long memory might remember this book as the subject of one of the very first television movies, starring Martin Sheen.

Moore said in an interview , “I discovered when I was writing novels that I was very interested in people who believe in something. All of us when we’re young want to have some ideal in life which makes it worth doing what we’re doing. For most of us we’re disappointed, disillusioned at a fairly early age, but I find that if you write about a political loss of belief in 1960, by 1990 no one will remember what it was all about, whereas if I write about a loss of religious belief, people will identify with that and that’s probably the main reason I do it.” (Quoted in the Irish Post, 1/23/99)