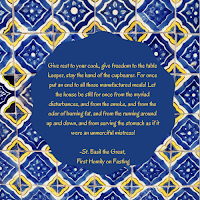 Basil begins this homily by likening his task to that of a general rousing his troops for battle. He cites all the benefits of fasting, particular in contrast to greed and licentiousness. Over and over, in different ways he points out that those who indulge themselves are weighed down, slowed down and weakened. He also addresses that desire we have to feast before the fast, working mightily to discourage overindulgence, particularly drunkenness.

If you were to come to fasting drunk, what benefit is it for you?  Indeed if drunkenness excludes you from the kingdom, how can fasting still be useful for you?  Don’t you realize that experts in horse training, when the day of the race is near, use hunger to prime their racehorses?  In contrast you intentionally stuff yourself through self-indulgence, to such an extent that in your gluttony you eclipse even irrational animals.  A heavy stomach is unconducive not only to running but also to sleeping.  Oppressed by an abundance of food, it refuses to keep still and is obliged to toss and turn endlessly.

And finally, he describes various groups and categories of people and points out how each of them can approach fasting in the most fruitful way. It's a stem-winder of a sermon! No one's off the hook!

Are you rich?  Do not mock fasting, deeming it unworthy to welcome as your table companion.  Do not expel it from your house as a dishonorable thing eclipsed by pleasure.  Never denounce yourself to the one who has legislated fasting and thereby merit condemnation to bitter penury caused either by bodily sickness or by some other gloomy condition.  Let not the pauper think of fasting as a joke, seeing that for a long time now he has had it as the companion of his home and table.  But as for women, just as breathing is proper and natural for them, so too is fasting.  And children, like flourishing plants, are irrigated with the water of fasting.  As for seniors, their long familiarity with fasting makes a difficult task easy.  For those in training know that difficult tasks done for a long time out of habit become quite painless. As for travelers, fasting is an expedient companion.  For just as self-indulgence necessarily weighs them down because they carry around what they have gorged themselves with, so too fasting renders them swift and unencumbered.  Furthermore, when an army is summoned abroad, the provisions the soldiers take are for necessities, not for self-indulgence.  Seeing that we are marching out for war against invisible enemies, pursuing victory over them so as to hasten to the homeland above, will it not be much more appropriate for us to be content with necessities as if we were among those living the regimented life of a military camp?

Take fasting, O you paupers, as the companion of your home and table; O you servants, as rest from the continual labors of your servitude; O you rich, as the remedy that heals the damage caused by your indulgence and in turn makes what you usually despise more delightful; O you infirm, as the mother of health; O you healthy, as the guardian of your health.  Ask the physicians, and they will tell you that the most perilous state of all is perfect health.  Accordingly experts prescribe going without food to eliminate excessive eating lest the burden of corpulence destroy the body’s strength.  For by prescribing not eating food to eliminate intemperance, they foster a kind of receptivity, re-education, and fresh start for the redevelopment of the nutritive faculty.  Hence one finds the benefit of fasting in every pursuit and in every bodily state, and it is equally suitable for everything: homes, fora, nights, days, cities, deserts.  Therefore, since in so many situations fasting graces us with something that is good in itself, let us undertake it cheerfully, as the Lord said, not looking gloomy like the hypocrites but exhibiting cheerfulness of soul without pretense.