From Pope Benedict XVI's General Audience Catecheses on the Apostles Simon and Jude. Image is from a study guide on the talks by Amy Welborn, available as a free download here.

Today, let us examine two of the Twelve Apostles: Simon the Cananaean and Jude Thaddaeus (not to be confused with Judas Iscariot). Let us look at them together, not only because they are always placed next to each other in the lists of the Twelve (cf. Mt 10: 3, 4; Mk 3: 18; Lk 6: 15; Acts 1: 13), but also because there is very little information about them, apart from the fact that the New Testament Canon preserves one Letter attributed to Jude Thaddaeus.

Simon is given a nickname that varies in the four lists: while Matthew and Mark describe him as a "Cananaean", Luke instead describes him as a "Zealot".

In fact, the two descriptions are equivalent because they mean the same thing: indeed, in Hebrew the verb qanà' means "to be jealous, ardent" and can be said both of God, since he is jealous with regard to his Chosen People (cf. Ex 20: 5), and of men who burn with zeal in serving the one God with unreserved devotion, such as Elijah (cf. I Kgs 19: 10).

Thus, it is highly likely that even if this Simon was not exactly a member of the nationalist movement of Zealots, he was at least marked by passionate attachment to his Jewish identity, hence, for God, his People and divine Law.

If this was the case, Simon was worlds apart from Matthew, who, on the contrary, had an activity behind him as a tax collector that was frowned upon as entirely impure. This shows that Jesus called his disciples and collaborators, without exception, from the most varied social and religious backgrounds.

It was people who interested him, not social classes or labels! And the best thing is that in the group of his followers, despite their differences, they all lived side by side, overcoming imaginable difficulties: indeed, what bound them together was Jesus himself, in whom they all found themselves united with one another. 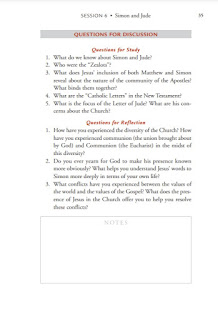