A few of St. Augustine's sermons on Lent have come down to us. This is a translation published in 1959 - you want sermons 205-211, that start on p. 185.  I am not sure of the dating or specific context - they seem to have been preached in different years, since the themes carry over from sermon to sermon - such as the repeated reminder that if you abstain from some food or drink, it then makes no sense to replace what you have sacrifice with something that either is more costly or affords you as much or greater pleasure. 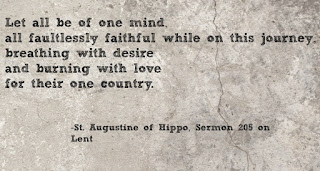 I appreciated this, from Sermon 207.

In regard to almsgiving, we are commanded to give bread to the hungry,  but He first gave Himself over to cruel enemies for us so that He might give Himself as food to us when we were hungry. We are commanded to receive the stranger; for our sake He 'came unto his own and his own received him not.'  In a word, let our soul bless Him who becomes a propitiation for all its iniquities, who heals all its diseases, who redeems its life from corruption, who crowns it in mercy and pity, who satisfies its desires in blessings.  Let us give alms the more generously and the more frequently in proportion as the day draws nearer on which the supreme almsgiving accomplished for us is celebrated. Fasting without mercy is worthless to him who fasts.

Let us fast, humbling our souls as the day draws near on which the Teacher of humility humbled Himself becoming obedient even to death on a cross.  Let us imitate
His cross, fastening to it our passions subdued by the nails of abstinence. Let us chastise our body, subjecting it to obedience, and, lest we slip into illicit pleasures through
our undisciplined flesh, let us in taming it sometimes withdraw licit pleasures. Self-indulgence and drunkenness ought to be shunned on other days; throughout this season, however, even legitimate eating is to be checked. Adultery and fornication must always be abhorred and avoided, but on these days special restraint must be practised even by mar-
ried persons. The flesh, which has been accustomed to restraint in regard to its own satisfaction, will readily submit to you when there is question of clinging to another's goods.

Of course, care must be taken to avoid merely changing instead of lessening pleasures. For you may observe that certain persons seek out rare liquors in place of their ordinary wine; that they, with much greater relish, counterbalance by the juice of other fruits what they lose by denying themselves the juice of grapes; that, in place of meat, they procure food of manifold variety and appeal; that they store up,
as opportune for this season, delights which they would be ashamed to indulge in at other times. In this way, the observance of Lent becomes, not the curbing of old passions, but an opportunity for new pleasures. Take measures in advance, my brethren, with as much diligence as possible, to prevent these attitudes from creeping upon you. Let frugality be joined to fasting. As surfeiting the stomach is to be censured, so stimulants of the appetite must be eliminated. It is not that certain kinds of food are to be detested, but that bodily pleasure is to be checked. Esau was censured, not for having desired a fat calf or plump birds, but for having coveted a dish of pottage. 5 And holy King David repented of having excessively desired water. 6 Hence, not by delicacies obtained with much labor and at great expense, but by the cheaper food found within reach, is the body to be refreshed, or, rather, sustained in its fasting.