! St. Frances Xavier Cabrini's feastday is today - November 13.
If you ever feel tired...read her story. 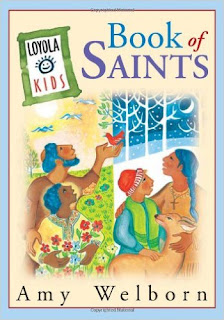 If you ever wonder how the Church can "go to the margins" ...read her story.
If you are under the impression that before the last couple of years Catholics were unaware of the missionary call of Christ and spent their lives closed up in fortresses....read her story.
Here’s an excerpt from the chapter on St. Frances Cabrini from the Loyola Kids’ Book of Saints  by Amy Welborn.  To reiterate – it’s an excerpt.  There’s more at the beginning at the end to relate her story to a younger child’s life.  It’s in a section called,“Saints are People who Travel Far From Home,” along with St. Boniface, St. Peter Claver, St. Francis Xavier and  St. Francis Solano.

By the late 1880s, Mother Cabrini became interested in a new problem. Hundreds of thousands of Italians moved to America, seeking a way out of the poverty of their new land. Very few of these immigrants were successful right away. Most lived in worse poverty than they’d endured back in Italy. They lived in crowded and dirty apartments, lived on scraps, and were unable to find work. Sad stories traveled back to the home country, right to Mother Cabrini. So Mother Cabrini set out on the long trip to America.
Over the next thirty-seven years, Mother Cabrini was constantly on the move, starting schools, orphanages, and hospitals for Italian immigrants, and others in need. In the first few years she traveled between New York, Nicaragua, and New Orleans. After having a dream in which she saw Mary tending to the sick lying in hospital beds, Mother Cabrini started Columbus Hospital in New York City.
After she founded the hospital, Mother Cabrini made trips back to Italy to organize more nuns for work in America. Between these trips, she and some sisters headed south to Argentina. The sisters went by way of Panama and then Lima, Peru. They made the journey by boat, train, mule, and on foot.
Back in the United State, Mother Cabrini traveled constantly taking her sisters to Chicago, Seattle, and Denver. It was in Chicago that Mother Cabrini, at the age of sixty-seven, passed away. She’d begun her work with just a handful of sisters. By the time she died, fifty houses of sisters were teaching, caring for orphans, and running hospitals. Her order had grown to almost a thousand sisters in all.

“I will go anywhere and do anything in order to communicate the love of Jesus to those who do not know Him or have forgotten Him.