Palm Sunday-related material from the Loyola Kids Book of Signs and Symbols by Amy Welborn with an excerpt from the introduction: 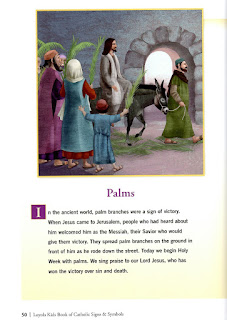 The Kingdom of Heaven is like…..
…a mustard seed.
…a treasure hidden in a field
….leaven
Think about the most important things in your life: feelings, ideas, emotions, realities, and hopes. Now try to explain these things in a way that communicates the depth and breadth and truth of what you’ve experienced.
It’s hard. It might even be impossible. For we all know this: no matter how eloquent we are, what we express only touches on the surface of what’s real. What’s more, the deeper and more important the reality, the more challenging it is to adequately express.
But we still try, because we are created to do so. We’re created in God’s image, which means we’re created to be in deep communion, to understand, to imagine, to love and create. And so to do so, we depend on metaphors and similes, signs and symbols.
Signs and symbols are not add-ons to human communication. All communication, from letters to words to hugs to great paintings, is symbolic. For what are signs and symbols? They are expressions that represent something beyond themselves.
So, yes, written and oral speech is symbolic. Gestures are symbols. Images, music, food, nature – all of what we see can be incorporated into life in symbolic ways.
Just as Jesus himself used that most absorbing means of human communication – the story – to communicate with us, so did he use deeply symbolic language as well as signs. The Scriptures are woven with imagery that remains fundamental to our understanding of God: rock, shepherd, right hand…
Spirituality involves the deepest realities of all: the human soul and its relation to the Creator. Signs and symbols play an especially rich and important role in this part of life.
Signs and symbols have always been important in Christian life and faith. Human beings are, of course, natural artists and communicators, so we use symbols to express deep realities. Early Christianity developed in an environment in which persecution was a frequent fact of life, so symbols became a way to communicate and build bonds and pass on the truths of the faith in ways that hostile outsiders could not understand.
Signs and symbols have played a vital role in Christian life over the centuries for another reason: for most of Christian history, most Christians could not read. In these pre-literate societies, most people learned about their faith orally, as parents, catechists and clergy passed on prayers and basic teachings. They also learned about their faith in the context of cultures in which spiritual realities were made visible throughout the year, through symbolic language and actions: they lived in the rhythm of liturgical feasts and seasons. They participated in the Mass and other community prayers, rich with symbolic gestures, images and even structured in a highly symbolic way, from beginning to end. Their places of worship, great and small, were built on symbolic lines, and bore symbolic artwork inside and out.
These people might not have been able to read – but they could read.
Their books were made of stone, of paint, of tapestry threads, of gestures, chant and the seasons of the year.
They could indeed read – they could read this rich symbolic language of the faith. Their language was one that communicated the realities of salvation history and God’s mercy and love through images of animals, plants, shapes and design.  They knew through these symbols that God is justice, God is beauty and with God, there waits a feast.